When Can I Skydive By Myself

When Can I Skydive By Myself?

Once you've had your first taste of skydiving, we bet you'll want to come back for more!

Perhaps it's the rush of the wind in your face as you fall through the air. Perhaps it's the peace and tranquility you get under canopy. Or perhaps it's the sheer blood-pumping adrenaline of jumping out of a perfectly good airplane that gets folks just like you addicted from jump one!

Whatever your reason for wanting to learn about solo skydiving, we're here to help. Find out more here.

The first step to skydiving solo

The first step to skydiving solo is, more often than not, to try a tandem skydive first.

A tandem skydive means you are attached to a highly qualified instructor for your jump. Your tandem instructor is responsible for the operation of the equipment through the jump, so it means you have more time to take in the experience around you.

That said, you're known as a tandem student when you make a tandem skydive, which means, quite rightly, that you still play a part in the jump. Rather than being a simple 'passenger', you'll be asked to adopt the skydiving body position for exit and freefall, and to lift your legs for freefall. You can even have a go at steering the parachute, if you like!

There's really no better way to start your journey to skydiving solo than to try out a tandem first - find out about tandem skydiving at Skydive Newport here.

How many tandems before solo?

There are various different ways to learn to skydive by yourself. Some of them do start with a series of tandem skydives, during which you'll be given equipment like an altimeter and you'll use the time in the sky to become more accustomed to the experience. The idea here is that you'll be better prepared to deal with freefall by yourself after you've done it a few times with someone else.

That's just one way of learning to skydive, though. There are others that don't include tandem skydives - in fact, you can technically learn to skydive without ever having made a tandem jump. It really depends on where you go to learn and the style of learning you choose.

The whole process of becoming a qualified skydiver depends on where you learned and the course you choose. In some places, you'll start off with a series of tandem skydives, as mentioned above. In others, you'll start jumping solo from jump one, with two instructors accompanying you and having less and less input in your jump as you progress. In a few places, the 'static line' form of skydiving lesson still exists, this being a slightly older style of learning that involves an automatically opening parachute.

Whatever method you choose, you'll be working toward a skydiving license. This is a small book, that looks like a passport, that says that you're signed off to jump alone. If you opt to choose a United States Parachute Association (USPA) affiliated drop zone, you'll be able to use your USPA license at any other USPA dropzone. You can even use your license to skydive overseas, as there are various USPA drop zones outside of the States too.

What you can do as a solo skydiver

Once you've got your license, there's a world of opportunity available to you!

You can learn all sorts of new and exciting things. As a solo jumper, you can learn things like formation skydiving, which is where you make shapes in the sky with other skydivers. Freeflying is all about learning to fly on all axis. Then there are parachute based disciplines too, things like CRW (canopy relative work) which involves flying around and building formations with other parachute pilots.

Whatever your route to becoming a solo skydiver, we're sure you'll love every single step.

Find out about tandem skydiving to get you started with Skydive Newport. 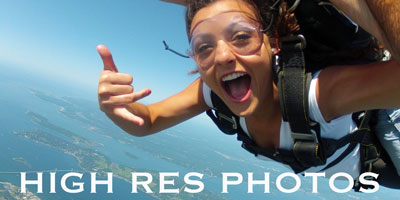 My second jump will definitely be here in Newport. I wouldn't go anywhere else.